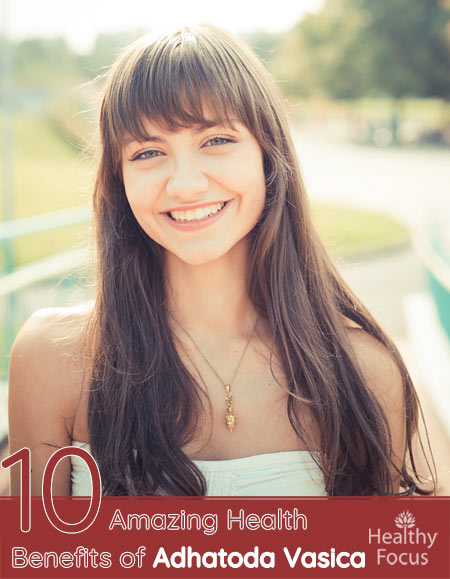 What is Adhatoda Vasica?

Adhatoda vasica is a plant commonly used as medicine in the Indian systems of Ayurveda and Unani. The plant is native to the Indian subcontinent including India, Nepal, Bangladesh,Myanmar, Laos and Sri lanka but has since been introduced to other parts of the world.

The plant is also known botanically as Justicia adhatoda but goes by a number of other names. These include Malabar nut, arusha, adulsa, bakash, stallion’s tooth, lion’s muzzle, vasaka and vasa.

The leaves, bark, flowers and roots of the plant have been used widely in traditional systems medicine for hundreds of years especially to treat respiratory conditions such as asthma, coughs and infections of the respiratory tract.

Adhatoda vasica is an evergreen shrub that can grow to a height of around four meters. Its oval-shaped leaves are between 10 and 30 centimeters long and 3 to 10 centimeters wide. The leaves, which have a bitter taste, are smooth-edged and oppositely arranged.

The plant’s trunk has a number of ascending branches with a yellowish colored bark. It produces flowers that are usually white and fruits containing four small seeds.

According to research, adhatoda has a number of medicinal properties including antimicrobial, anti-inflammatory, antioxidant and expectorant properties. (1)

As mentioned above, Adhatoda vasica has a long history of use especially in traditional Indian medicine. It has been used mainly for respiratory disorders but it has a number of other potential benefits.

In the Indian subcontinent, adhatoda is a very popular traditional remedy for infections of the upper respiratory tract. It has been used for centuries to treat respiratory infections because of its antibacterial properties.

A number of Ayurvedic formulations also include the herb as one of the main ingredients in combination with other Ayurvedic herbs. It is often combined with herbs such as echinacea to treat respiratory infection.

Studies suggest that the herb can help treat and infections of the upper respiratory tract and help manage the symptoms.

In one study, researchers treated patients suffering from acute respiratory infection, with a combination of adhatoda vasica, echinacea and Eleutherococcus senticosus. They found that the recovery time was 2 days faster than patients who received a standard treatment. (2)

It may also help treat sinus infections and bronchitis.

Adhatoda vasica is also a very effective home remedy for cold symptoms and coughs. A therapeutic juice can be made by grinding up the leaves and mixing then with a small amount of water.

Make sure that you wash the leaves before grinding them up with a pestle and mortar along with a small amount of boiled water. Strain the juice and you have an effective and natural remedy that you can store in the refrigerator. The traditional dose for coughs and colds is a teaspoon of the juice to be taken 3 times each day.

A cough syrup made with Adhatoda vasica is also used traditionally to treat coughs and other respiratory issues in kids over the age of two.

To make a cough syrup for your kids, take some fresh vasaka leaves then steam them. After they are steamed sufficiently, crush the leaves to extract the juices. Then take a quarter teaspoon of your juice and mix it well with a little honey. This remedy should help get rid of phlegm and relieve your children’s cough.

NOTE : Speak with your doctor before administering this herbal remedy to your child.

Studies have found that vasaka has anti-inflammatory properties. It can help reduce inflammation around the lungs and in the airways and can also help treat asthma.

According to one study, a compound called vasicine found in the plant is an effective bronchodilator. This can help ease breathing and reduce the wheezing associated with asthma.

A review of studies using different vasa formulations found that all were effective. However certain formulations including Vasa Ghrita and Vasa Avaleha were more consistently effective. (3)

Decoctions or juices made with Adhatoda vasica can also help soothe a sore throat. Because of its antibacterial, anti-inflammatory and antiviral properties, the herb can help soothe irritation and swelling in the throat or tonsils and also help fight throat infections.

As well as its uses for respiratory disorders, Adhatoda can help detoxify the system and is an effective, natural treatment for various kidney conditions.

One such condition called uremia is associated with increased levels of urea and nitrogenous waste in the bloodstream. It typically occurs following renal failure or renal injury and leaves the kidneys unable to get rid of the toxins.

According to traditional use, a decoction made from vasaka can help decrease the build up of urea and other toxins by eliminating the waste through the urine.

Adhatoda is also commonly used to treat a range of common digestive conditions such as bloating, flatulence, stomach upset and indigestion. It has also been used traditionally as a remedy for diarrhea.

To help boost digestive function, a juice is usually made by mixing the ground leaves with a small amount of boiled water. Combine 2 teaspoons of the juice with half a teaspoon of ginger juice and take twice a day.

Adhatoda vasica has excellent anti-inflammatory properties and is often applied externally to treat common inflammatory conditions like arthritis and rheumatism. It is usually applied in the form of a poultice to reduce swelling and ease pain.

The plant has also been used in traditional Indian medicine to treat gout – a painful condition caused by a build-up of uric acid.

According to research, Adhatoda vasica may also have anti-ulcer activities.

A study published in 2006 looked at the effects of a powder made with the herb on rats induced with ulcers. The researchers found that the rats treated with vasaka experienced significant benefits compared to the control group. The researchers concluded that the plant had great potential as a natural anti-ulcer treatment. (4)

Adhatoda vasica is also used to arrest the bleeding associated with minor wounds, sores, hemorrhoids and gum disease. The anti-inflammatory and antibacterial nature of the herb can help ease irritation and prevent infection from taking hold.

In Ayurvedic medicine, the juice is also taken internally to reduce menstrual bleeding in women suffering from heavy periods.

Adhatoda vasica may also be good for the skin. it can be applied topically to help relieve irritation and redness caused by a number of common inflammatory skin conditions.

Adhatoda vasica can be taken internally or applied topically depending on the condition you are trying to treat. A decoction and medicine can be made from the fresh leaves as well as other parts of the plant.

The leaves are usually steamed or boiled and the juice extracted before being mixed with ginger juice or honey to make a medicine to treat coughs and other respiratory ailments.

Externally, a paste made from the leaves can be applied to the skin to heal wounds or used in the form of a poultice.

Adhatoda vasica is also an ingredient in a number of herbal preparations but may be listed as an ingredient under any one of its many common names.

If you are using a commercial preparation, be sure to follow the dosage instructions carefully.

There is no recommended dose but a maximum of three grams of the dried leaves each day is suggested.

Have you ever used adhatoda vasica? Please let us know what you used it for and how effective you found it to be. We would be delighted to hear from you.