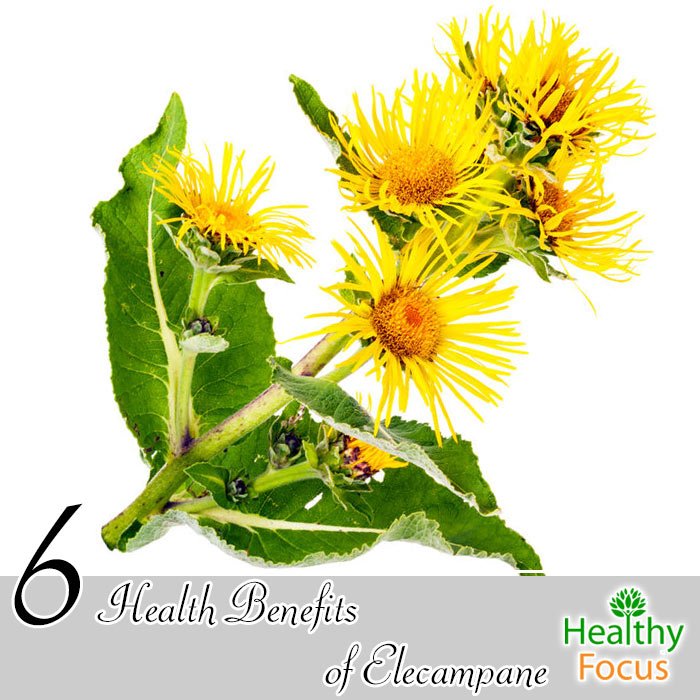 Elecampane is an herb with centuries of medicinal use especially in Europe where it has mainly been used as a respiratory tonic. Known botanically as Inula helenium, it has several other common names including horse heal, velvet dock, elf dock, aunee and scabwort.

It is native to Europe and can be found thriving throughout the British Isles, Southern Europe and temperate parts of Asia. Elecampane grows best in damp fields and meadows and can be seen growing along roadsides and hedges.

Elecampane is an attractive and large plant growing to between three and six feet in height. It has bright yellow flowers that resemble sunflowers which bloom during the summer months. The sturdy stem rises up from a rosette of oval, pointed leaves. The lower part of the stem is quite hairy while the upper part of the stem is more downy.

The root of the plant, which is used to make medicine, is a thick rhizome which is white on the inside and yellow in the outside. The scent of the plant resembles blooming violets and its taste is warm and bitter.

The reason that the herb works so well to treat a range of respiratory ailments can be explained by its chemical make up. The major active constituents in the plant are inulin, volatile oils such as camphor and helenin, mucilage, alantonic acid, sesquiterpene lactones, saponins, sterols and pectin.

These compounds give the plant a good range of medicinal actions including expectorant, sedative, diuretic, diaphoretic, antifungal, relaxant, antiparasitic and anthelmintic properties.

Elecampane is one of a number of herbs with a very long and distinguished history of use. Its medicinal benefits were recognized by the Ancient Romans and Greeks who regarded the herb as a general health tonic and a cure all for a wide range of conditions. Back in those days, elecampane was used as a remedy for digestive troubles, dropsy, menstrual problems and sciatica.

It was also used to treat respiratory conditions and regarded as an excellent remedy for the symptoms of cold and flu because it could help clear up mucus and phlegm. Elecampane was also widely used to help stimulate sweating and clear up fevers.

It was later used by the Anglo Saxon people as a general health tonic but also as a remedy for a wide range of skin ailments including leprosy. Medieval herbalist made use of the herb as one of the major ingredients in a medicinal wine used to treat digestion. The wine was named Potio Paulina following St Paul’s recommendation that wine be used to heal the stomach.

The plant has also been used outside of Europe. In Japan it was used for fragrant purposes and as a food preservative by the Chinese. The American Indians have also used the roots for medicinal purposes in decoctions and infusions to treat tuberculosis and lung infections.

Elecampane was also listed as a medicinal herb in the US Pharmacopeia. It has been valued for centuries as a herbal tonic for conditions related to respiration. It was used traditionally to remedy chronic bronchitis and asthma. Its expectorant properties were known to help ease respiration and soothe the linings of the bronchial tubes.

What are the Medicinal Benefits of Elecampane?

Perhaps the main historical use of the herb was to ease respiratory conditions including asthma and bronchitis. It is still a popular herbal remedy for these conditions today.

Elecampane possesses strong expectorant qualities that help to break up and expel any excess mucus or phlegm in the respiratory system. This helps clear your airways from congestion and helps you to breathe much more comfortably.

Traditionally used in the treatments of coughs caused by pulmonary tuberculosis, research has indicated that the volatile oil from the plant is active against tubercle bacillus. The volatile oil in the herb stimulates circulation in the airways while the herb’s saponins help to clear mucus out of the lungs.

Active constituents like alatolactone have expectorant and antitussive properties as well as possessing antifungal and antibacterial actions.

According to traditional and modern usage, elecampane is an effective alternative remedy for a wide variety of respiratory ailments including the common cold, flu, pneumonia, pleurisy, bronchitis, asthma and emphysema.

Elecampane may also posses mild sedative properties and like many herbal teas could be useful in soothing your nerves and anxiety. A warm cup of tea made from the herb before bed may be just what you need to get a good night’s sleep.

Of course, a herb that works for one person will not necessarily work for another but given that elecampane is generally regarded as safe, it would not hurt to give it a go.

One of the traditional uses of the herb was in treating intestinal parasites and worms. It has been used successfully to treat a range of parasites including hookworm, threadworm, roundworm and whipworm. One of the plant’s constituents – alantolactone is thought to be responsible for its anthelmintic actions.

A Chinese study has found that the herb possesses some mild antibacterial actions which can further help relieve colds and infections caused by bacteria.

Elecampane essential oil can be diluted in a carrier oil and applied topically to the skin to aid general skin health and to treat certain skin conditions. It may help ease the itchiness caused by psoriasis and eczema and other rashes.

It can also be used in a poultice and applied to areas of the skin which are irritated or you could try adding a few drops to you bathtub for an all over body experience.

The essential oil made from elecampane can be diffused in the home to freshen up the smell and to alleviate any nasty odors from cooking or smoke. It is sometimes used in soaps and other cosmetic products for its camphor-like fragrance.

How to Use the Herb

Elecampane is available in all the common forms. It can be used as a tincture, capsule or tablet while many people enjoy a tea made from the root. There is also an essential oil available which can be diluted and applied topically to the skin.

High doses of the herb are not necessary as it is a very potent remedy. However, in order o get its therapeutic value, it should be taken in sufficiently high doses whenever you are in need of treatment.

For the most suitable doses of the tinctures and capsules, make sure that you consult an expert and read any labels carefully. The following dosages are guidelines only.

You can also make a soothing tea from the herb with around a gram of the dried herb for each cup of water. Allow the herb to steep in boiled water for at least ten minutes, then cool and strain before drinking. It has a rather bitter taste so you may want to add some honey to make it more palatable.