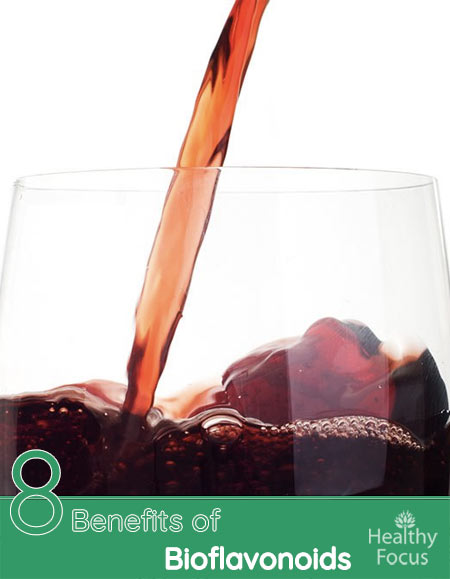 You will be more than aware of the recommendations to eat more fruit and veg and there are plenty of good reasons for this. Most people know that they contain an array of essential vitamins and minerals but fewer may know that they are also a great source of healthy bioflavonoids.

Bioflavonoids, often known simply as flavonoids, are a class of very powerful phytochemicals. They have their own impressive health benefits but they also help the body get the most out of the vitamin C you have consumed.

Research shows that bioflavonoids have a great range of medicinal actions including antiviral, anti-inflammatory, antioxidant and antitumor properties. (1)

You can break bioflavonoids down into a few categories. They are often broken down into anthocyanidins, isoflavones, flavans, flavonols, flavones and flavanones. Other very well known bioflavonoids such as quercetin are considered to be subcategories of the main categories.

Foods such as kale, spinach, watercress and red onion are extremely high in bioflavonoid content. In fact, the vast majority of fruit,vegetables and herbs contain bioflavonoids but generally speaking, more colorful produce tends to be richer in flavonoids.

Hemorrhoids is a very common complaint with as many as 75% of people suffering at some time during their lives. They are extremely uncomfortable and often painful but here are a number of natural methods of preventing or treating the complaint. One such method is by consuming more bioflavonoids.

Several studies have demonstrated that bioflavonoids help improve the body in ways that can treat hemorrhoids. Bioflavonoids improve circulation, vascular strength and tone and capillary flow. Consuming plenty of bioflavonoids might well help to both prevent the condition and to treat it. (2)

Varicose veins is another very common condition that affects an estimated 60% of the population. They occur when the veins are stretched and the valves that prevent blood flowing backwards do not function properly. This results in blood flowing backwards and polling in the veins. Thankfully, a healthy diet rich in bioflavonoids can help prevent and treat this uncomfortable condition. (2)

One type of flavonoid called rutin can help strengthen the veins allowing them to work more efficiently. Several studies have revealed that rutin can ease the aches, pains and swelling caused by varicose veins. Rutin can be found in various fruits especially citrus fruit, asparagus and buckwheat.

Another type of bioflavonoid called oligomeric proanthocyandin complex can also help decrease swelling and pooling in a person’s legs. OPCs can be found in pine bark and grapeseed extract while a similar type of flavonoid is seen in cranberries and blueberries.

Again, linked to heart health is the ability of bioflavonoids to help regulate blood pressure. Numerous studies have revealed that consuming plenty of flavonoid foods can help reduce blood pressure and protect against heart attack and stroke.

One study done by researchers at Mount Sinai’s School of Medicine set out to examine the link between bioflavonoid consumption and hypertension. They hypothesized that those with hypertension had lower flavonoid levels and that eating more foods rich in flavonoids could decrease blood pressure. (4)

Another study conducted in 2011 revealed that certain types of flavonoid including flavones and anthocyanins might help prevent high blood pressure. (5)

Certain bioflavonoids can protect your liver and help treat liver disease such as hepatitis. Studies have demonstrated that catechins, flavonoids found in high levels in green tea, are especially effective. According to research, catechins can help people with both chronic hepatitis and the acute viral form of the disease. Trials used a dose of between 500 and 750 mgs of catechins up to 3 times daily.

Most people will have suffered from cold sores at some point in their lives. The herpes simple virus is responsible for cold sores which are extremely contagious. Not only can other people catch them from you but they can actually spread to other areas of your body including the genitals and the eyes. There is some evidence that bioflavonoids in combination with vitamin C can help the cold sores to heal.

One of the better known and most researched boflavonoids – quercetin is an effective treatment for various types of allergy. Quercetin is a powerful antioxidant found naturally in a variety of produce including citrus fruits, pineapple and onions.

Quercetin works because it has antihistamine properties as well as anti-inflammatory actions which can reduce the impact of seasonal allergies as well as skin reactions and even asthma. Quercetin controls the release of the body’s histamine in response to allergens resulting in fewer of the familiar symptoms like runny nose, watery eyes and hives.

Research done in Iran found that the phytochemical – quercetin helped to fight allergies just as effectively as certain prescription antihistamines with fewer side effects. (7)

I am quite certain that everybody has suffered from a bruise from time to time. They are usually caused by trauma of some kind causing the blood vessels to break and resulting in the familiar swelling and discoloration of the skin.

Some people bruise very easily and a combination of vitamin C and bioflavonoids are often recommended as a natural treatment. As we have already mentioned, bioflavonoids help to strengthen your capillaries which helps bruises to heal up more quickly.

Studies have also found that a combination of vitamin C and flavonoids help to improve gum health in people suffering with gingivitis. People deficient in vitamin C are more at risk of periodontal disease. (9)

Studies have found that when vitamin C is given without the addition of flavonoids, it is less effective. If you are suffering from gingivitis and your consumption of vitamin C is low, consider supplementing with vitamin C and bioflavonoids.

As well as the benefits already mentioned, there is some evidence that bioflavonoids can help support various other conditions including: