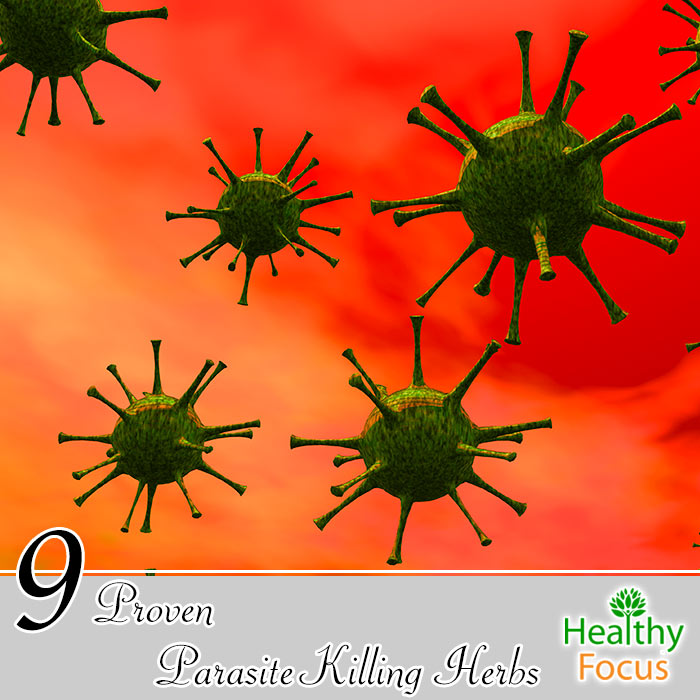 The very thought that you may have a parasite inside you is certainly a scary one. We tend to associate parasites with the developing world but they are actually a lot more common in the developed world than you would believe. Parasites can be the cause of many mysterious symptoms but there are ways to treat them naturally as you are about to see.

A parasite is basically any organism which feeds and lives off another organism. Intestinal parasites are very small organisms like worms which feed from the body’s nutrition. Common examples of parasites are hookworms, roundworms, tapeworms and various other types of worm.

Parasites come in a multitude of shapes or sizes and can cause wide ranging problems. Some of these parasites eat your food which leaves you feeling hungry and hurts your weight.

Other types of parasite feed off the body’s red blood cells leading to anemia. Others can cause itching, insomnia and irritability.
If you are suffering from a mysterious gut issue and have failed to recover from your symptoms, parasites may well be the cause of your problems.

How People get Parasites

There are plenty of ways that people can contract parasites. They may enter the body via contaminated water or food such as undercooked meats. Meat is far from the only source of parasites; fruit and vegetables can also be contaminated allowing parasites to thrive.

Parasites can also enter the body through the skin and from handling pets. People who travel abroad can easily contract parasites from contaminated water sources.

Once infected, parasites can be easily passed on to other people. Not cleaning your hands thoroughly after using the toilet means you could leave parasites on pretty much every object that you touch. Making sure that you wash properly is an important step in preventing their spread.

Telltale Signs that you are Infected by a Parasite

If you have a parasite, there are certain telltale signs and symptoms which include the following:

For anybody that just loves the stuff, there is plenty of good health news. Garlic is among the very best herbs for eliminating unwanted parasites from the body. Garlic spells the end for more than 20 different strains of bacteria and up to 60 different forms of fungus.

Garlic is effective against parasites and is also known to prevent secondary infection. The major active constituents in garlic which help rid the body of parasites are called allicin and ajoene. These two compounds are able to kill dangerous amoebas and also worms like hookworms and pinworms.

Garlic also contains excellent antioxidant properties that can protect us against the oxidation parasite toxins can inflict.

To get the real benefit of your garlic, it is important to chop it up or crush it. Allicin is produced when an enzyme called allinase interacts with alliin and is not actually present when garlic is in its most natural state.

If you want to get the very best out of your garlic, be sure to juice it, crush it or chop it before you consume it.

When combined together, these compounds work in tandem on their path through the body killing tiny parasites, eggs and parasitic larvae.

The essential oil of cloves can be used to eliminate eggs left behind in the intestines by worms and it is regarded as one of the most effective natural remedies for destroying a range of parasitic larvae. Cloves are also known to destroy all strains of Staphylococcus, Sreptococcus and Shigella. (1)

Good old turmeric is not only a must have in the kitchen for its abilities to add spice to your dinner but it is also one of the best all round herbs for treating a multitude of illnesses. It is an excellent natural anti-inflammatory which can also help heal wounds, detox the body and yes…even kill unwanted parasites.

It gleans most of its ability from the presence of curcumin..a powerful polyphenol compound that has been well researched. (2)

You can safely eat just about as much of the herb as you like to get the most from its powerful health effects.

Give it a go…your body will thank you for it.

Being a member of the same family as turmeric, it is not surprising that ginger shares many of its qualities.

It is especially helpful for digestive complaints and helps improve blood circulation. It also helps to improve the production of acid in the gut which helps not only prevent parasitic infection but also kill off any existing parasites.

You can take ginger in fresh or powdered form or as a supplement.

Research has demonstrated that a compound called juglone present in the green husks, fruit and leaves of the black walnut has antiviral, anti-parasitic and antimicrobial properties. (3)

The juice extracted from the green hulls of black walnuts is especially useful in killing parasites including tapeworm, ringworm and pinworm.

It is available in several forms including powder, capsule and alcohol tincture.

Wormwood is a small perennial herb which is used medicinally to treat a variety of stomach conditions. It is considered to be a very effective natural remedy for eliminating intestinal worms. It also has excellent antimicrobial properties which can treat various other infections.

It should however be avoided by pregnant and breastfeeding women,

Pumpkin seeds are extremely healthy and they also contain a compound called curcurbitin which is known to have anti-parasite properties. It paralyzes worms making them fall of the walls of the intestine.

One Chinese study published in 2012 evaluated the effects of pumpkin seeds against tapeworm infestation and found them to be extremely effective. (4)

Munching away at pumpkin seeds during the day is a healthy way to stave off hunger or you can grind them up and add them to your smoothies.

This spicy, healthful pepper has excellent abilities to kill fungus and destroy parasites. It also has numerous other uses and is well known for its ability to stimulate circulation.

Research has demonstrated that it is effective against a range of fungal strains including Candida. (5)

The roots and rhizomes of the Goldthread plant have been used in China for centuries to deal with a variety of digestive disorders as well as killing bacteria and eliminating parasites.

It contains a compound called berberine from which it gets its broad range of antimicrobial abilities.