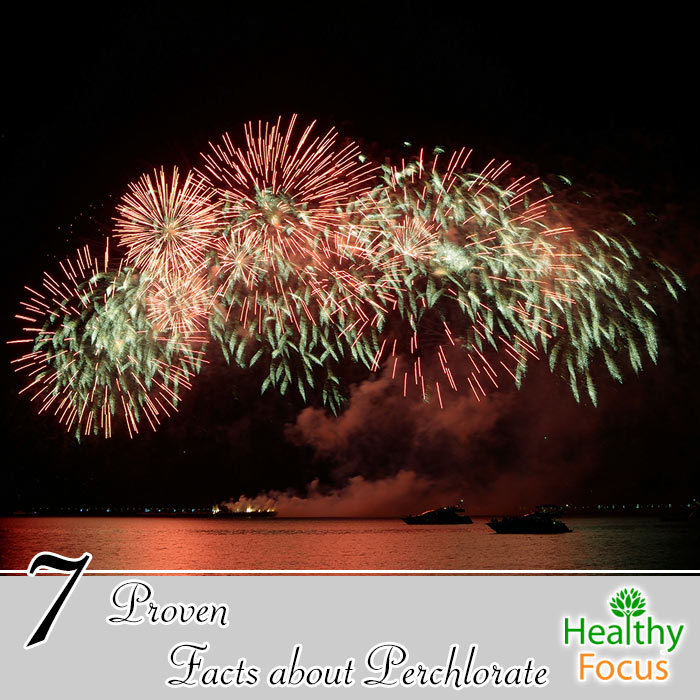 Perchlorate can occur naturally but it is also a man-made type of chemical which is used extensively in the manufacture of flares, fireworks, explosives and especially in rocket fuel. It is also often commonly present in various bleaches, fertilizers, batteries and even airbags.

Over recent years, it has started to proliferate in the environment and has become something of a health concern. It is commonly found in lakes, groundwater, tap water and is sometimes even present in bottled water.

Perchlorate is also present in soil and in plants and has made its way into our food chain. Studies into agricultural contaminants found high levels of perchlorate in a significant percentage of vegetables including organically grown products.

Bearing in mind that perchlorate is definitely toxic, how concerned should you be and what can you do about it?

This article will give you the uncomfortable truths about perchlorate and may help you to protect yourself from its potentially devastating effects.

1. Exposure to Perchlorate is Very Common

It is far easier than many may imagine to be exposed to perchlorate. Owing to rampant levels of pollution, the chemical is widespread throughout the environment. Studies have found that perchlorate is present in many of our water sources including rivers, groundwater, lakes and tap water. (1)

Pollutants like perchlorate find their way into the soil and consequently into our food supply. Perchlorate and other harmful contaminants is present on the water that we drink and in much of the food we consume.

If you think that eating organic produce is better for you then you are probably correct but when it comes to perchlorate, organic is no guarantee. A study published in the Journal of Environmental science in 2005 was conducted to analyze industrial contaminants in vegetables.

The study found that perchlorate was present in quantifiable levels in 16% of lettuce and other leafy greens and 32% of organically grown produce. (2)

According to the Environmental Protection Agency, perchlorate has been detected in the groundwater of 26 of the U.S. states. It has also been found in very low levels in cow milk originating in California.

2. Perchlorate is Toxic to Human Health

Despite being present in trace amounts in nearly every one of us, the evidence suggests that perchlorate is most definitely toxic both to human health and the environment. According to research, perchlorate is harmful to the thyroid glands, hormone balance and metabolic function.

Perchlorate has also been classified as a harmful toxin by the California Department of Toxic Substance Control who consider it to be a toxin which can severely threaten both human health and the environment.

3. Perchlorate Can Harm the Thyroid

One of the biggest health concerns related to perchlorate is its impact on the thyroids. Perchlorate can essentially prevent the thyroid from producing the hormones it needs to ensure normal growth and proper development.

The receptors in the thyroid gland are particularly vulnerable to the effects of halogens. Iodine is an example of a halogen with a positive effect whereas other halogens such as bromine, fluorine and chlorine have a far less desirable effect.

Perchlorate unfortunately has a similar chemical makeup to those harmful types of halogen and studies have demonstrated that it disrupts the function of the thyroids in a similarly negative way. (3) Moreover, according to recent research published in the American Thyroid Association. perchlorate exposure leads to a significant increase in the risk of autoimmune thyroid diseases.

Because of its inhibitory effects on thyroid function, perchlorate has actually been used in the treatment of overactive thyroid. It works by inhibiting the uptake of thyroidal iodine and reduces the production of thyroid hormones. (4)

On top of its ability to harm hormonal development and its potential to cause reproductive damage, there are concerns that perchlorate may be a risk factor for cancer. The EPA consider perchlorate to be a likely carcinogen for humans.

While the levels in most of the U.S are considered safe, that is bound to be a major concern for the 11 million or so Americans who live in an area where perchlorate levels are significantly above the standard considered to be safe.

5. Pregnant Women and Children are at Greater Risk

Studies have found that perchlorate interferes with the way that iodine is absorbed by the body. When this happens, it can result in an iodine deficiency which causes numerous potential issues especially for pregnant women and their unborn child.

A deficiency in iodine during a woman’s pregnancy is well known to increase the chance of the baby being born with physical and mental complications including stunted growth, hearing problems and mental retardation.

Not only can an iodine deficiency affect babies while they are still in the womb but it can cause problems in early childhood including developmental delays, learning difficulties and problems with reading as was found in this British study published in 2013. (5)

Iodine deficiency is still far too common around the world even in countries like Canada and the U.S. which have iodine fortification steps already in place.

6. The Risk to Breastfeeding Mothers

Not only can perchlorate be harmful to the child before he or she is born but recent studies have revealed that it may be much more dangerous to breastfed babies than anybody had realized. Exposure to perchlorate through food, water or cleaning products can make its way into breast milk putting your child at greater risk.

A recent study found that perchlorate in the breast milk of subjects was higher than the accepted levels for infants. The researchers also found that iodized salts were a more effective method of increasing iodine levels in the milk than iodine supplements which had no significant impact. (6)

It is unfortunate that for many people avoiding exposure to harmful chemicals is almost impossible. People whose work involves contact with chemicals that contain perchlorate usually have higher concentrations of it in their system.

This is not especially surprising but it can have a very detrimental effect on their health. As well as the thyroid problems that we have already talked about, people working with perchlorate are at risk of a number of other health complaints.

Common conditions include elevated blood pressure, poor lung function and skin reactions. In addition to those common complaints, research done into the health effects of 48 workers has found that T3-hormone levels are lower. T3-hormones are responsible for many bodily functions including body temperature, metabolism and heart rate. (7)

Does Iodine Protect Against the Effects of Perchlorate?

If a person is iodine deficient, the effects from perchlorate exposure may be even greater even if their level of exposure is not especially high. Without the necessary levels of iodine in your body, perchlorate is able to bind into the thyroid receptors more easily which inhibits the thyroids ability to produce hormones and the increase the risk of thyroid disease.

The FDA states that so long as your diet is healthy there is no need to take iodine supplements to protect against the effects of perchlorate in the levels currently present in food and water.

As always, it is better to get your minerals from dietary sources and the FDA say that the majority of Americans get sufficient iodine form their diets already. Milk, dairy products, seafood and grains are all excellent sources of iodine.