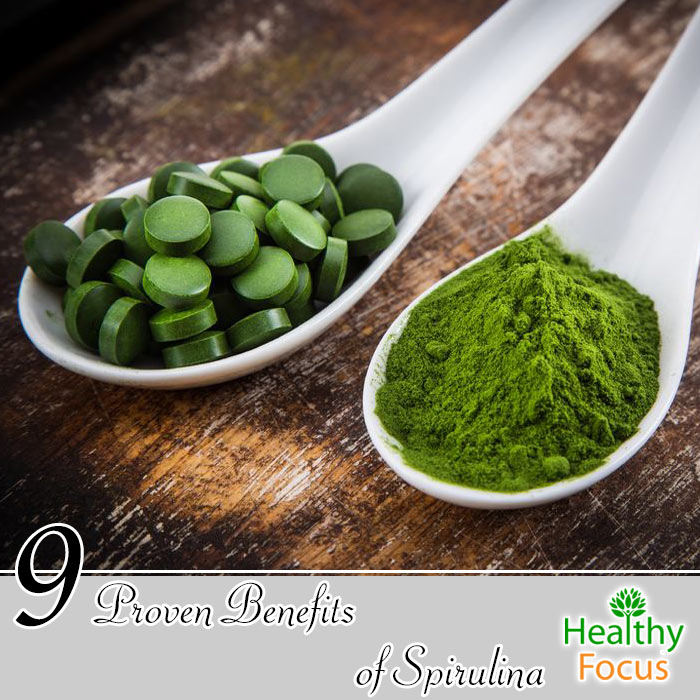 Spirulina is a blue green form of algae that is among the best researched and best-known superfoods in the world. Renowned for its amazing nutritional profile as well as its intense taste, spirulina like another superfood algae – chlorella is available in many different supplementary forms or as a nutritious whole food.

Spirulina also known as arthrospira is an edible cyanobacteria or blue-green algae which is derived from one of two species – Spirulina platensis and Spirulina maxima. It has a number of proven health benefits ranging from cancer protection to heart health and weight loss.

It is especially rich in the B vitamins providing you with 207% of your recommended daily value of thiamin and a whopping 306% of your riboflavin. It is also extremely high in iron and manganese and magnesium and contains slightly lower amounts of calcium, potassium, zinc and phosphorus. It also contains essential fatty acids such as GLA.

What are the Health Benefits of Spirulina?

All over the world, there has been a major increase in the people affected by heavy metal poisoning. One of the biggest problems is arsenic toxicity which is a big enough issue in the West but an even greater concern in parts of Asia.

Millions of the people in countries including Bangladesh, India and Taiwan are consuming very high levels of arsenic in their drinking water with many developing chronic arsenic toxicity.

According to research, around 35 of the Bangladeshi population is already showing signs of arsenic toxicity. Because of these serious concerns, spirulina has been evaluated in Bangladesh for its ability to treat arsenic poisoning.

In a study published in 2006, 24 victims of arsenic poisoning were given spirulina extract at 250 mg along with zinc twice a day. When compared to the patients on the control group, the researchers found that spirulina and zinc combined well to reduce the amount of arsenic present in the body. The participants who took the spirulina experienced a marked decrease of 47% in arsenic. (1)

READ  Bismuth and its Potential Dangers

Whether or not spirulina can protect against cancer in humans is still very much untested  however, it contains plenty of good antioxidants. A number of in vitro and animal studies have suggested that spirulina has the potential to boost immunity and increase the production of infection fighting proteins and antibodies. These actions may help the body ward off chronic illnesses like cancer and other infections.

Up to now, over 90 research articles have appeared in scientific journals evaluating the ability of spirulina to combat cancer cells. (2)

A recent Czech study published in 2014 found that spirulina was rich in a tetrapyrrolic compound related to the bilirubin molecule – a powerful antioxidant with anti-proliferative actions. In the study, they found that it was effective in the laboratory against human pancreatic cancer cells. (3)

While the signs coming out of the laboratories are very encouraging, further clinical research is necessary before we can fully evaluate spirulina’s anti-cancer effects.

Taking spirulina supplements can help promote better digestion and improve bowel function. It can also help to stimulate the growth of healthy microflora in the gut which decrease the risk of disease and sickness.

Poor digestion and disease like leaky gut syndrome are connected directly to an imbalance of intestinal flora. Where there is an imbalance, harmful bacteria such as candida can thrive. Poor diets, high in sugar and processed foods means that yeast infections like candida are on the rise resulting in poor health overall.

Taking spirulina has many benefits for the heart according to research. One of the major benefits is that using spirulina can have a positive impact on cholesterol levels.

A study published in 2010 fed rabbits a diet high in cholesterol for a period of four weeks then combined the high cholesterol feed with spirulina (either 1% or 5%) for a further eight weeks.

By the end of the trial, LDL cholesterol levels had been reduced by 26% in rabbits given 1% spirulina and by 41% in animals fed a dose of 5% spirulina. Rabbits given spirulina also experienced a significant reduction in total cholesterol and serum triglycerides. (6)

READ  The Science Behind NMN for Longevity

As well as reducing your cholesterol levels, spirulina can also help keep blood pressure under control. According to research done in Japan, pigment found in spirulina called phycocyanin has antihypertensive properties. (7)

Spirulina’s ability to reduce both cholesterol and blood pressure both have a significantly positive effect on the heart’s health. The Japanese study referred to above also found that supplementing with spirulina reduced the surface of the intimal aorta by 33%. This would suggest it can help protect against atherosclerosis and reduce the risk of subsequent heart attack and stroke.

Spirulina is a rich source of proteins and diets which are high in proteins and nutrients like spirulina can help stimulate weight loss and reduce body fat. Protein requires more energy in order to metabolize and helps maintain the body’s lean tissue which also contributes to the way fat is burned.

Another reason that spirulina can help weight loss is that it curbs your hunger pangs. Try sprinkling some high protein spirulina powder in your smoothie or on your oatmeal in the morning to help curb your hunger during the day.

The incredible nutritional value offered by organic spirulina can help provide people with a huge energy boost. Combine 1 tsp spirulina with lime juice and freeze into cubes that you can suck for an instant energy boost.

How to Take Spirulina

Spirulina is available in a number of different forms.

You can buy supplementary capsules and tablets with the recommended dose of the supplement being between 1 gram and 5 grams a day.
Alternatively, you can get spirulina powder that you can sprinkle into your juice or smoothies.

Hawaiian Spirulina Pacifica is among the most nutrition packed foods in the world. It provides you with more nutrition in each gram than other spirulina on the market. It is a great source of vitamin A, K and B-12 as well as being incredibly dense in minerals like iron, chromium and manganese. It actually contains nearly 4000% the iron of spinach and nearly 3000% the level of beta carotene possessed by carrots.

Precautions and Side effects

There are certain concerns over the safety of spirulina. Because it comes directly from the sea, there is always a risk of contamination. Make sure that you buy you products from a reputed supplier.

Pregnant women and nursing mothers should avoid spirulina and WebMD explains that contaminated spirulina could cause a number of harmful side effects including: