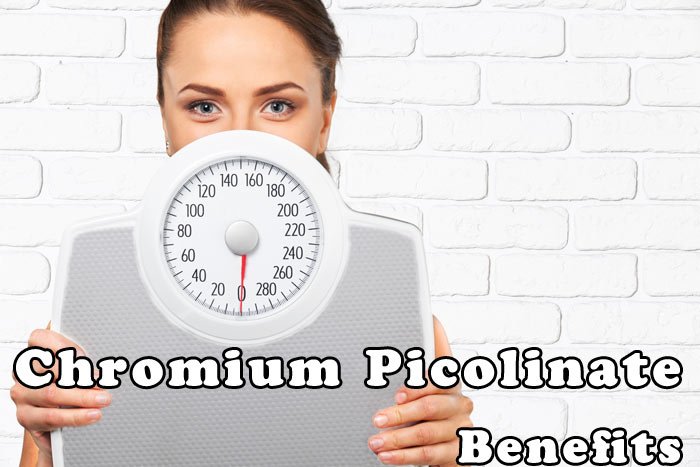 What is Chromium Picolinate?

Chromium is a trace mineral found in various foods such as broccoli, brewer’s yeast, bran, lettuce and onions. There is some debate over the need to take chromium supplements because chromium deficiencies are rare and there is uncertainty whether loading on chromium will actually have any beneficial effects.

The recommended daily dose is only 25 micrograms each day which you can achieve by eating a cup of broccoli each day. Chromium supplements come in much larger doses and have become increasingly popular of late on the back of their weight loss claims.

How well they work for weight loss is still open to debate. Chromium does however have other health benefits which we will look at in this article.

There are several types of chromium available in supplementary form and their names refer to how the chromium is delivered into your body. These are the most common forms of chromium: 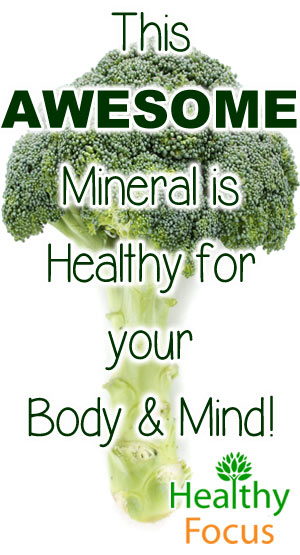 As I mentioned earlier, the actual benefits of chromium supplementation are unclear and deficiencies are rare. Getting sufficient chromium from your diet should not be difficult but chromium supplements ensure that you get far more than the recommended daily allowance of 25 micrograms.

Indeed, most chromium supplements pack something in the region of 200 to 1000 micrograms but there is no evidence that taking chromium in such high doses has an especially positive impact.

There is however a growing body of research that shows that chromium can improve blood sugar levels and improve insulin resistance. Keeping your blood sugar levels in control is very important to overall health and benefits us in a number of ways from warding off heart disease and diabetes to reducing appetite and enhancing weight loss.

The supplement market is absolutely flooded with products promising a short cut to weight loss. With so many of us struggling to keep our weight under control, it is no wonder that they are so successful but can chromium really help you to lose weight and what does the research have to say about it?

READ  The Science Behind NMN for Longevity

According to research, chromium can have a positive effect on your weight loss efforts in the following ways – it helps curb cravings for carbohydrates, reduces body fat and fights against insulin resistance.

One of the reason that many people struggle with their weight is an overwhelming craving for foods rich in carbohydrates. This compelling hunger for starchy or sugary foods is a very common addiction involving the brain’s pleasure center.

The “feel good” sensation is one of the reasons that people turn to comfort foods whenever they feel depressed. Research has demonstrated that chromium picolinate supplements can help reduce these cravings and that those with the most severe cravings experienced the best benefits from supplementation.

A study published in 2005 recruited 113 mostly overweight and obese patients with depression and carb cravings. The subjects were given either a placebo or treated with chromium picolinate supplements of 600 micrograms a day for 8 weeks.

The results demonstrated that chromium picolinate experienced a significant reduction in carb cravings compared with the placebo group possibly because it improved blood sugar levels and reduced the drive for sugars and starch. (1)

According to the manufacturers of the supplements, chromium does not only curb your craving for carbs but also helps reduce body fat and improve lean mass.

However, the few scientific studies done so far have not been able to demonstrate that chromium picolinate alone can affect weight loss. That does not mean to say that it may be effective as part of an overall diet and exercise plan.

A 24 week study undertaken in 2012 assessed the effect of chromium picolinate on 80 overweight adults who were given 1000 micrograms of chromium daily. The study found no difference between the subjects taking the supplement and the placebo group

The researchers concluded that chromium picolinate did not have a positive weight loss outcome. (2) This study confirmed the results of an earlier trial which found that 200 micrograms a day of chromium had no effect on body weight in overweight women. (3)

Chromium supplements may help treat those with type 2 diabetes and research shows that people who have the disease generally have lower chromium levels than those without.

While researchers are still uncertain about the precise role played by chromium, there is evidence that it may play a key role in insulin resistance. Insulin resistance contributes to several metabolic disorders which can increase the risk of diabetes, heart disease and obesity.

One animal study published in 2004 examined the effect of chromium supplements on obese, insulin resistant rats and found that it improved insulin sensitivity. The researchers concluded that it could potentially improve carbohydrate metabolism people with type 2 diabetes. (4)

Other studies have made similar findings like this study published in 2006 (5) which found that chromium picolinate improved the rates of glucose disposal and insulin resistance in diabetic rats.

Other studies have demonstrated that chromium was beneficial for diabetic patient. One study was able to demonstrate that a combination of chromium picolinate and biotin improved glucose fasting levels in obese diabetic subjects. (7)

Animal studies seem to suggest that chromium might help reduce blood pressure though researchers remain unsure whether it has the same effect on people.

There is also the possibility that chromium supplements can have a beneficial impact on cholesterol levels specifically by reducing triglyceride levels. Results have been mixed but some have been very positive including one clinical study which showed chromium may reduce LDL cholesterol when combined with grape seed extract. (8)

Several studies have been done to explore the effect of chromium on depression with mixed results.
One small scale clinical trial found that chromium picolinate supplements was able to improve the symptoms of depression in subjects suffering from atypical depression. Other larger studies have however found chromium had no beneficial effects. 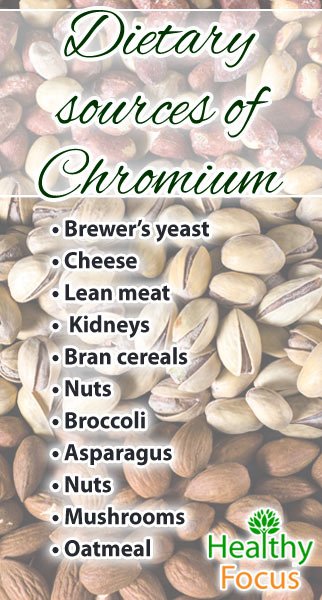 Chromium has been well tolerated in doses up to 1000 micrograms in clinical trials and is considered to be safe. For general health purposes, you should be able to get adequate amounts of chromium from natural food sources. Food rich in chromium includes: