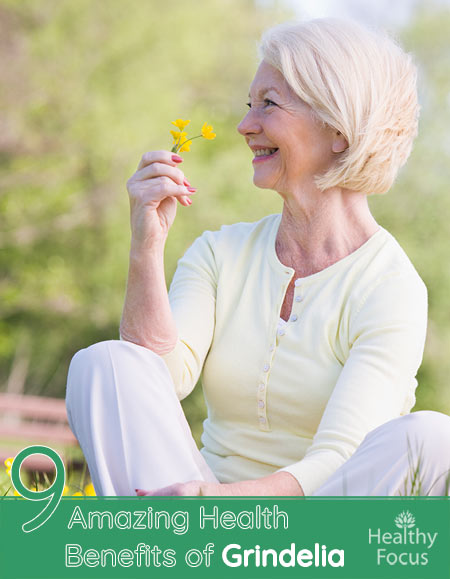 Grindelia is a plant genus which belongs to the same family as sunflowers. Grindelia species are native to the Americas including the U.S.A and Mexico. The genus was named after the Latvian botanist – David Grindel.

Grindelia is a large genus of many species including Grindelia robusta and Grindelia squarrosa, which are used to make medicine. Other names for the herb include gumweed, curlycup, gum weed, tar weed, August flower and rosin weed.

This perennial plant grows to around a meter or three feet in height and is characterized by its bright, yellow flowers and its triangular leaves. Much of the aerial part of the plant is used to make herbal medicine including its flowering tops and dried leaves.

In traditional medicine, the herb is usually used orally in the form of a tea, tincture or liquid extract or used to make a topical lotion.

These herbaceous plants have long been used in traditional medicine in both South America and by the Native Americans for a range of conditions including bronchitis and various skin complaints.

It was not until the middle of the 19th century that the plant was recognized for its medicinal potential and became more widely used. The herb was introduced to the U.S Pharmacopoeia in 1882 and was commonly used until about 1960. Since then, the herb has largely fallen out of favor with modern herbal practitioners, nevertheless it is still sometimes used to treat certain conditions including dermatitis, congestion and bronchial issues.

Grndelia was approved by the German Commission E for catarrh in the upper respiratory tract. the herb has traditionally been used to treat catarrh bronchitis, whooping cough, asthma and common cold symptoms. it has also been used to treat cystitis and for its actions as a natural expectorant, antispasmodic and cardiac depressant.

Externally, the herb has been applied as a lotion to treat dermatitits caused by poison ivy or poison oak. It has traditionally been used topically in combination with licorice root and Lobelia inflata or Indian tobacco.

The following compounds have been found in the herb but the exact composition of Grindelia herbs depends on the species : (1)

The herb has a number of therapeutic properties including antispasmodic, relaxant, anti-inflammatory, antioxidant, expectorant and sedative properties. These actions give the herb a wide range of potential uses.

While there is not a great deal of scientific evidence for the use of the herb, there is plenty of anecdotal evidence as well as many years of traditional use to rely on. Remember that the following uses are for information purposes and you should always consult your doctor before taking any herbal medications.

One of the most common traditional use of grindelia herb was to treat congestion and other symptoms of the common cold like coughs and wheezing.

Grindelia works as a natural expectorant, meaning that it can help break up the phlegm and mucus that often builds up when we have a cold. By loosening the mucus, it is easier for the body to expel through coughing. Grindelia also has anti-spasmodic properties that can help prevent spasms in the respiratory system and reduce the discomfort of coughing.

Grindelia has been used by the Native Americans as a natural remedy for bronchitis as well as other conditions affecting the lungs. There is very little research into the methods of action but it may work by relaxing a person’s airways and helping them to breathe more freely.

Other conditions  for which the herb has been used include catarrh, asthma and emphysema.

Grindelia has also been used to help calm down the heart naturally and may have an effect similar to a beta blocker. By calming down the heart rate and improving its rhythm, the herb can also have a very positive effect on the mind.

Many people who suffer palpitations or irregular heart beat find themselves in a downward spiral when they start to feel anxious about their system. This can lead to uncomfortable feelings of anxiety. Natural beta blockers not only help you feel physically better but can also have a profound effect on your emotional well-being.

Grindelia herb has antispasmodic effect which can help relieve tension or spasms in the body’s muscles. This action can help soothe a range of bodily spasms including respiratory and digestive system spasms. It may also help soothe muscles in the limbs and help relieve cramping.

Inflammation is at the heart of the majority of diseases including serious illness like cancer and heart disease. natural anti-inflammatory herbs can help reduce the risk of illness and may even help treat certain inflammatory conditions.

Grindelia herb contains various flavonoids with antioxidant potential including kaempferol and quercetin. These antioxidants can help protect us against disease caused by free radical damage or oxidative stress. Antioxidants also have an anti-aging effect that may be visible externally by helping keep your skin looking younger and healthier.

Several in vitro studies have demonstrated that grindelia has both natural antibacterial and anti-fungal activities, which have proven effective against a range of bacterial and fungal strains.

Studies have found that resin fractions and phenolic acids extracted from the herb were able to inhibit the growth of various bacterial strains such as Bacillus subtilis and Staphylococcus aureus. (3)

Studies have also found that grindelia inhibited the growth of various fungi including Candida tropicalis, Trichoderma viride and Mucor mucedo. (4) Other studies have found that the essential oil from Grindelia camporum was effective against many fungal species. (5)

Grindelia has traditionally been used to treat urinary tract infections and cystitis. there are no studies into its efficacy for UTIs but it may work because of its excellent antibacterial actions.

Grindelia can also be applied topically to help treat a range of skin complaints and has often been used as a natural remedy for dermatitis. The antibacterial and anti-inflammatory properties found in the plant make it a suitable topical remedy for minor wounds, cuts, bites and stings. It can help prevent infection  and soothe irritation and redness.

The herb is also an effective remedy for reactions to poison ivy or poison oak.

How to Use Grindelia

Grindelia herb can be taken in the form of a tincture or liquid extract or used to make a herbal infusion or tea.

To make a cup of grindelia tea, simply add a teaspoon or so of the dried leaves to a mug of boiling water. allow the tea to steep for 10 minutes or so and add honey to taste. You can drink 2 or 3 cups a day to treat colds or bronchitis or try a cup before bed to calm your nerves.

The tea or infusion can be applied topically to treat the skin.

Have you ever used grindelia for bronchitis or any other condition. Please let us know what you thought of its effects and whether you would recommend the herb.