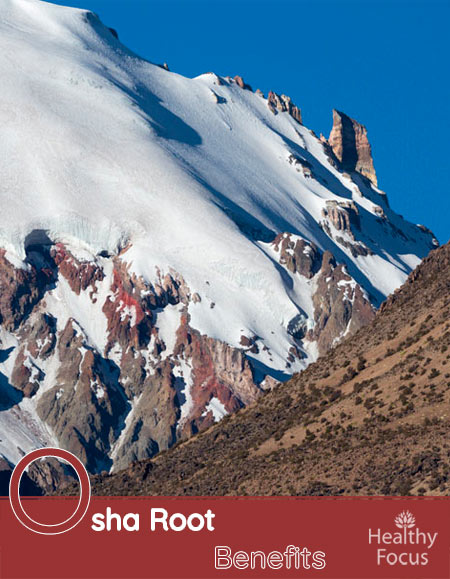 Growing high up in the Rocky Mountains somewhere between 5,000 and 10,000 feet is a little known perennial herb called osha. It inhabits the dry ravines and high meadows and its root has been used by Native Americans for medicinal reasons for many years.

What is Osha Root?

The osha plant also known as Ligusticum porter and bear root contains important natural oils such as camphor, ferulic acid, saponenis, phytosterols and terpenes. Despite the fact that it is not so well known, it is regarded as one of the very best herbal treatments for respiratory conditions including coughs, colds and lung issues as well as throat complaints. As of the time of writing, osha is not commercially cultivated and is usually sold as a wild-crafted product in tinctures, sprays or capsule form.

Undoubtedly the best known use of osha root is its ability to help cleanse the lungs and alleviate respiratory difficulties. Traditionally the Native Americans wrapped the root in leaves and strung it up near their new born babies in order to cleanse the air that they were breathing.

Osha root is believed to be so effective as a treatment for breathing issues because of its expectorant properties which help clear mucus from the respiratory passage enabling the user to breathe more comfortably. It also helps relieve congestion by increasing the circulation of blood to the lungs.

It helps to increase dilation of the bronchial tubes giving it the potential to treat numerous breathing conditions including asthma, pneumonia, allergies and emphysema.

This dilating effect coupled with its ability to increase the utilization of oxygen to the body not only relieves congestion but also helps you to take stronger, deeper breaths.

2. Osha Root for Cold and Flu

Another one of osha root’s most important benefits is its ability to treat the symptoms of cold and flu. It is considered to have antiviral effects which can help combat the viral strains that lead to full blown cold or flu. Like other herbal remedies such as echinacea, experts believe that osha root should be taken immediately you feel the onset of symptoms.

Despite not having an antihistamine effect in the strictest sense of the word, it has similar histamine inhibiting effects which help alleviate the familiar symptoms of colds and flu such as coughing, wheezing and redness. It also has a mild numbing effect which can help soothe a painful throat caused by coughing.

As I mentioned above, osha root can be a very effective remedy to mollify a sore throat especially when it is taken as part of a throat spray or as an ingredient in a syrup preparation. It combines extremely well with other natural antivirals such as manuka honey, propolis and thyme. You can try making your own sore throat syrup by mixing 2ml of osha root with a teaspoon of honey.

I am not sure how many of you this applied to but I daresay there are some adventurous people among you. If you are the type of person that likes to climb high, then you will be aware of the very real risks of high altitude sickness which are the symptoms that begin to appear when you are above 8,000 feet.

These symptoms include fatigue, headaches, brain fog, difficulty breathing and sleeping. My preferred remedy is to stay close to the ground but for those of you who are more driven, chewing on some fresh osha root can apparently help combat these symptoms very effectively. If you are planning a climb into the high mountains, consider packing a few fresh osha roots along with the other essentials.

Another good reason to pack some osha before heading off into the wilderness is that it has anti-venomous activity. It is said to be effective in treating insect bites and stings including ant bites, wasp, bee and hornet stings. It may also help treat more serious cases of poisoning from certain snake and spider bites.

Experts recommend taking osha root in tincture form at a dose of around 3 ml as soon as they are bitten with follow up doses of around 1 ml every 30 minutes. It is also possible to apply a poultice made with osha root directly to the affected area. Of course, if the bite or sting is extremely serious, it can lead to very severe consequences so make sure that you call 911 and get professional assistance.

How to Purchase Osha

As I already mentioned, osha is not commercially cultivated so any products sold are actually wild-crafted. For that reason, it is imperative that the consumer finds out as much as they can about the person selling it. It is available typically in tincture, capsule and spray form but if you can get hold of the fresh root, it can also be made into a tea concoction by following the steps below.

How to make Osha Root Tea

While osha root preparations are more available than they used to be, if you can acquire some of your own root, you can make your own healthy and cost effective remedy in the form of osha root tea.

Herbal decoctions essentially involve long and slow simmers in order to extract all of the therapeutic goodness from the plant. Osha root tea is very easy to make and because the flavor is not to everyone’s taste, we will give you a few ideas to make it more palatable.

How to make it

Many people enjoy the flavor but if you find it difficult to get down, you can easily make it more palatable by evolving it into a latte type drink.

According to Web MD, there is insufficient scientific information to determine a precise dose but it broadly depends on factors like age and health. It is important to follow the instructions given on the product’s label. If you are in any doubt, speak to your healthcare professional before you use it

Osha root is considered to be a safe supplement for the majority of healthy people and no side effects have been reported. There are also no known contraindications with other medications.

According to Web MD, taking osha root is unsafe for pregnant women as well as breastfeeding mothers. Osha root can potentially stimulate menstruation which may result in miscarriage.

Because there is no data relating to its safety for breast fed infants, it should be avoided by nursing mothers.