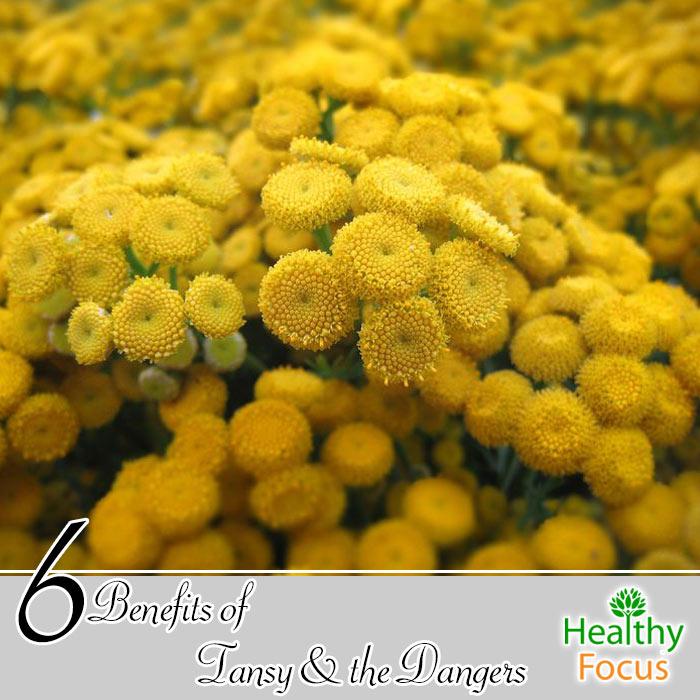 Tansy is a flowering plant widely distributed throughout Europe, Asia and North America. Assuming that you live in one of these regions, there is a very good chance that you will be familiar with the plant. Known scientifically as Tanacetum vulgare, the plant thrives in the wild in meadows, stream banks and country roads while it is also cultivated as an ornamental garden plant.

Tansy has been used for a very long time not only as an ornamental plant but also as a pesticide, a preservative and a medicinal herb. The plant is however known to be toxic to both humans and livestock which has seen its medicinal use decline and these days it is rarely included in herbal guides.

This perennial, herbaceous plant belongs to the aster family and is originally a native to temperate regions of Asia and Europe. It was later brought to other areas of the world including the US and Canada. In some areas, it is regarded as an invasive species. Other common names for the plant are common tansy, cow bitter, golden buttons and bitter buttons.

The plant has compound leaves and produces small, yellow flowers that look a little bit like buttons. The flowers can be seen during the summer months. The plant has a scent reminiscent of camphor with a slight hint of rosemary. Both the leaves and the flowers are extremely toxic if they are consumed in high doses.

The plant’s essential oil contains several toxic substances including thujone. Thujone is known to cause liver damage as well as convulsions and brain damage.

Despite being toxic to both humans and animals, tansy has a very long history of use. It was originally cultivated by the ancient Greeks as a medicinal plant while as long ago as the 16th century, it was regarded as in the British isles as a garden necessity.

Back in the 8th century, tansy was grown by the Benedictine monks in Switzerland and in Charlemagne’s herb gardens. It was commonly used as a remedy for parasites and intestinal worms. Tansy was also used to treat a variety of other conditions including rheumatism, digestive disorders, fevers, sores and measles.

When we go forward a few centuries to the Middle Ages, we see that tansy was used in high doses to induce abortion. Interestingly enough, the herb was also used by women trying to conceive and to reduce the risk of miscarriage.

During the 15th and 16th centuries, tansy was added to Lenten meals by the Christians to commemorate the Israelites and the bitter herbs that they ate. It is also believed that they added tansy to the meals to help control flatulence which developed from many days of eating pulses and to help prevent parasites from eating so many fish during the Lent period.

Tansy has also been used to wash the face and is purported to have helped purify and lighten the skin. During the 19th century in Ireland, folk use recommended bathing in a liquid solution made with salts and tansy to cure rheumatism and other forms of joint pain.

With he passage of time, the use of tansy as a medicinal herb has fallen out of favor. Many of its historical uses have been largely discredited and there is a great deal of concern over its toxicity. The dangers of tansy are largely due to its thujone content. The level of thujone varies from plant to plant making dosage recommendations extremely difficult.

According to Germany’s regulatory body – the Commission E – the uncontrolled use of tansy can result in thujone being absorbed by the body in toxic amounts even in moderate doses.

These warnings are certainly not to be taken lightly, however, there are still some people who suggest that if you use the herb in small enough doses, it can have a number of important health benefits.

The Medicinal Benefits of Tansy

Tansy has emmenagogue, antiparasitic, bitter and abortifacient properties. The main medicinal uses of tansy are to help treat intestinal worms and parasites and to stimulate menstruation in women that have irregular cycles or the absence of menses.

Both the leaves and the flowering tops are used to prepare a herbal medicine which contains thujone in very high levels, sesquiterpenes, bitter glycocides, terpenoids, tannin and vitamin C among other medicinal compounds.

The following are the most common modern uses of tansy but please bear in mind that tansy is extremely toxic and be sure to consult an expert to verify the safest possible dosage.

One of the main historical uses of tansy was as a treatment for intestinal worms and some herbalists still use it for this purpose today. Because of its high thujone content, it is considered to be an especially effective remedy for various intestinal parasites. Unfortunately, its thujone content also makes it highly toxic and it is usually taken in lower doses in the form of a tea.

Tansy has carminative properties that can help improve general digestion and also deal with common digestive conditions like flatulence and dyspepsia. It has also been used to treat stomach ulcers, cramping, pain and gallbladder issues. Tansy is also regarded to be an effective appetite stimulant.

Tansy is known to have potent emmenagogue properties. This means that it can help stimulate menstruation in women who suffer from irregular periods. Please not that it must never be used by women during pregnancy as it may also stimulate abortion.

Tansy was historically used to treat painful joint conditions like arthritis and rheumatism. It is also sometimes used to treat other types of pain like migraines, headaches, sciatica and nerve pain.

There is no research to bear this out, but tansy might have some value in treating kidney illness and helping eliminate kidney stones. Some experts recommend that tansy is combined with nettles to make a tea that can be drunk several times a day. Again, be careful not to overdo your consumption, even in tea form as the long term use of moderate doses may also prove toxic.

Tansy contains vitamin C and may help bolster your immune system and help relieve symptoms of the cold or the flu.
It can also be applied topically to the hair to destroy fungus and bacteria and to help kill lice. Some people apply it topically to the skin to help ease rashes, itching and clean up minor wounds but even the topical application of tansy is associated with the risk of sensitivity.