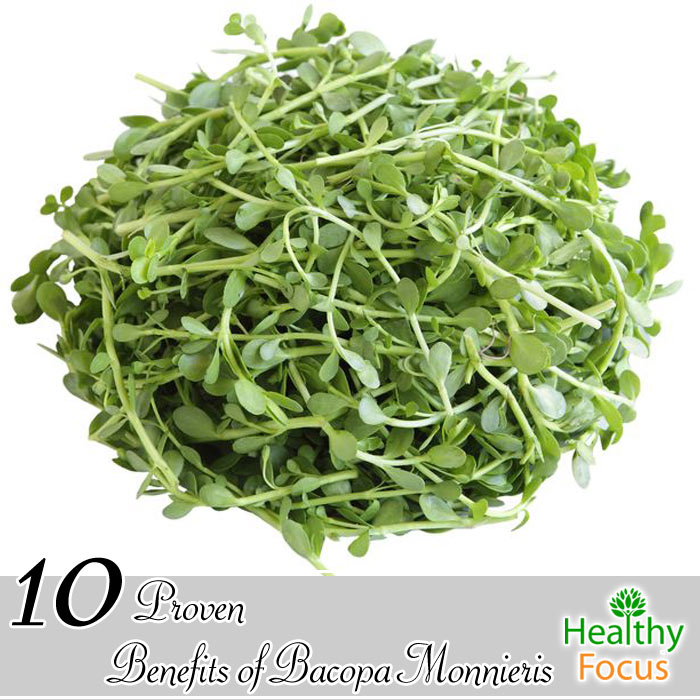 What is Bacopa Monnieri?

Bacopa monnieri is commonly known as waterhyssop, water hyssop and brahmi after the Hindu God – Brahma. It is a perennial herb with medicinal qualities found in wetlands in various parts of the world including Asia, Africa, Australia, Europe and South America.

Bacopa monnieri has an extremely long history of medicinal use especially in Ayurvedic medicine where it has been used for various brain disorders. It is a popular natural treatment for epilepsy, ADHD, memory loss, anxiety and even Alzheimer’s.

It is also used to treat asthma, anemia and inflammation. But that is not all, when it comes to health, bacopa can tick off a wide variety of boxes as you are about to discover.

We mention antioxidants a lot on this site and for good reason. It is vital that we get enough natural antioxidants into our systems to maintain good health and protect against disease. Fortunately, nature provides us with a variety of natural options and research has shown us that bacopa monnieri is a great choice.

Studies conducted in vitro and several animal studies show that bacopa can protect against the oxidative damage that can lead to serious illnesses. (1) In a study on diabetic rats, researchers found that bacopa monnieri helps to protect various organs because it can enhance antioxidant activity. (2)

Stress is becoming more of a concern in today’s modern world than it has ever been. Not only does stress take its toll on the mind and the ability to function from day to day but it is also a huge factor in various physical conditions.

Little wonder then that people are desperately seeking a natural alternative to the powerful and potentially harmful pharmaceutical options on the market.

Bacopa monnieri is one potential option. According to research done on animals, it has the potential to relieve stress naturally putting you in a better frame of mind without the worry of dependency and other side effects.

Indian researchers found that bacopa monnieri extracts could help protect you from both chronic and acute stress by reducing adrenal activity. They concluded by suggesting the herb possessed powerful natural adaptogenic activity. Good news for those of us who would prefer the natural route to emotional well-being. (2)

3. For Depression and Anxiety

In the same way that bacopa monnieri can help reduce stress, it can also help to treat the crippling symptoms of depression and anxiety. Researchers in Michigan found that an extract of the herb had a very positive effect on the brain activity of rats and could potentially help to treat both conditions.

Researchers and experts believe these effects can be attributed to the way the herb enhances the effects of certain neurotransmitters like acetylcholine, serotonin and GABA. (3)

Some promising research has been done into the effects of bacopa monnieri on memory. In one small scale Australian study, researchers treated volunteers with either 300 mg of the herb each day or with a placebo.

Prior to the beginning of the three-month long experiment, all the participants were tested memory, visual ability and processing speed. These tests were repeated halfway through the experiment and at the conclusion. The researchers found that the volunteers who took bacopa had significant improvements in all tested abilities when compared to the placebo group.

The research team concluded that bacopa might improve vital cognitive processes which depend on information input like memory and learning. (4)

The bacosides found in bacopa which are responsible for its cognitive improvements may also play a part in treating attention deficit disorder. This is a chronic condition which begins during childhood causing a child to become hyperactive and impulsive and unable to focus on schoolwork.

In one study, children who were suffering from the condition treated with 50 mg of bacopa extract twice each day displayed significant improvements compared to the placebo group. (5)

Bacopa monnieri has some promise as part of a novel treatment for dementia and Alzheimer’s disease according to some experts and early studies. Studies done on animals and in the laboratory suggest that the herb may help protect the brain from the effects of aging that lead to dementia. (6)

The research is inconclusive since the results may not be replicated in humans. However, a study into the effects of bacopa on older patients suffering from memory problems has been done with promising results. After taking 450 mg of bacopa a day for a period of three months experienced improvements in verbal memory and attention. (7)

Bacopa monnieri may also be a useful ally against epilepsy and other similar disorders that result in seizure. The results of experiments conducted so far have been mixed but several have been promising. In one Indian trial, researchers found that people who took bacopa extract experienced a reduced frequency of seizures. (8)

Other experiments have been inconclusive and more work is needed before we can say with confidence that bacopa can help treat epilepsy.

Millions of people around the world are suffering from chronic pain. Unfortunately, over three quarters of people who have chronic pain are also suffering from a form of depression. Studies have demonstrated that bacopa monnieri is a safe and effective treatment for various types of pain.

Not only does the herb have excellent antidepressant abilities but it also has the ability to reduce pain as well as many prescription pain killers according to a review published in 2013. The review also noted that bacopa had anti-inflammatory abilities and could protect some of the body’s major organs from toxicity. (9)

Animal studies seem to suggest that bacopa can improve vascular function and the body’s use of nitric oxide. Both of these actions have a positive effect on blood pressure. Although bacopa is not so well known in terms of its ability to normalize blood pressure, researchers concluded that it could be an effective, natural treatment option. (10)

While bacopa is certainly most lauded for its abilities to treat the brain, it can also help cleanse the liver of toxins. A study on rats published in 2010 found that bacopa extract could help improve liver function after the organ was damaged by toxins. (11) This suggests that bacopa could be a useful detoxification tool in humans.

How to take Bacopa Monnieri

Like moist herbal medicines, bacopa monnieri is available in various forms including tea, powder and capsules. If you are going to take bacopa supplements, be sure to read the dosage instructions clearly and make sure that you buy from a respectable source.

How to make Bacopa Tea

Bacopa tea is a great way to gain all of the herb’s benefits and is a great alternative to your regular tea.
It has a slightly bitter flavor so you may like to add some healthy honey to make it more palatable.

To make your tea, simply add a couple of fresh leaves or a healthy pinch of the dried leaf to a cup of boiling water. Allow the leaves to steep for at least ten minutes, strain and drink up.

If you can get the fresh leaves, there are studies that indicate they contain more saponins than the dried version.

Are there any Side Effects?

Because of its mild sedative effects, you should be careful not to combine bacopa with other sedatives.

Always consult your doctor if you are concerned especially of you are pregnant or have a preexisting medical condition.