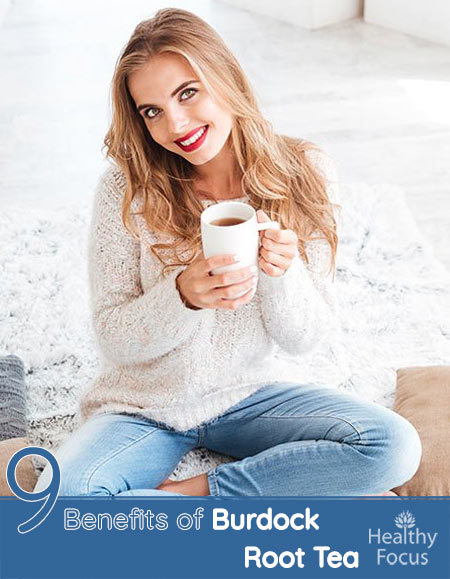 What is Burdock Root?

When I was young, dandelion and burdock soda was very popular. Now I knew what dandelion was, but never really found out or cared what burdock was.

Burdock root or Arctium lappa belongs to the same family of biennial plants as the dandelion and Asteraceae or daisy. It is also known variously as greater burdock, lappa, edible burdock, beggar’s buttons and thorny burr. This biennial plant is originally native to Europe and Northern Asia but is now found commonly across the world and it is cultivated around the globe in gardens for the use of its nutritious root.

Burdock has big leaves in the shape of a heart and reddish, purple thistle flowers. Its burrs will stick to animal fur and clothing when they are rubbed up against. The plant’s deep roots are black on their outside with a brown or green interior.

The burdock root is the part used for therapeutic purposes. It is a slim, brown root vegetable that can grow up to 2 feet long, It is primarily made up of carbohydrates, essential oils, tannins, fatty oils and plant sterols.

Burdock is sometimes used as a root vegetable in various dishes but it can also be used to make a healthy, therapeutic tea.
Burdock root contains various minerals including magnesium, potassium, phosphorus, calcium, iron and copper. It also contains vitamin C, B6 and folate.

In parts of Europe and Asia, people have long been aware of the therapeutic value of burdock root. In Japan, the root is consumed as a vegetable and eaten either raw or cooked. The leaves can also be eaten as a vegetable.

Traditional Chinese practitioners have been using burdock root for hundreds of long years. In traditional medicine, burdock is linked to a range of illnesses including lung, stomach and skin health. In traditional European medicine, the root has been used to improve digestion and for diuretic purposes.

1) To Purify the Blood

Burdock root has traditionally been used to purify the blood. Herbal texts describe burdock as an ‘alterative’ and believe that it can cleanse the blood of toxins. (1)

Burdock possesses several active compounds that can detoxify the body and cleanse it of heavy metals. This helps improve the health of your organs and boosts overall health. It is also known to promote better circulation of blood to the surface of the skin making it useful for skin health as we will look at below.

2) For the Lymphatic System

If you are unfamiliar with the body’s lymphatic system, it is basically your ‘drainage system’. It comprises of a large blood vessel and lymph node network which carries fluids from the tissues into your blood or vice versa.

A strong and healthy lymphatic system is essential to reducing the risk of many serious diseases and complications. Burdock root tea can help stimulate detoxification and effective lymphatic drainage. (2)

Burdock root tea contains plenty of excellent antioxidants that can help improve the health of your skin and combat the effects of early aging. It also helps to stimulate the circulation of blood up to the skin’s surface resulting in improved skin health.

As a natural detoxifier, burdock root tea can also clear the body of harmful toxins that can damage the skin.

Burdock root or products that use it as an ingredient can also be applied topically to help deal with a wide range of annoying skin conditions. These include psoriasis, acne and eczema.

Like its cousin, the dandelion root, burdock root tea can also be used as a natural diuretic. Diuretics are used to help stimulate your kidneys by allowing you to pass urine more frequently and in greater quantity.

By consuming plenty of natural diuretics like burdock root tea, you can help eliminate excess fluids and sodium from the system, This can help improve your overall health, the health of your kidneys and conditions like gout.

Burdock root also contains inulin which is a type of soluble fiber. It helps improve digestive health and is also known to reduce blood sugar levels. In Europe, burdock root is used to help lower blood sugar and it is regarded as a suitable herb for diabetics.

Several studies done on animals have revealed that burdock root can help treat or reduce the severity of various diabetic complications including diabetic retinopathy. (3)

According to traditional use, burdock root has been used in Europe dating back as far as the Middle Ages to treat various tumors. There is some agreement among herbalists that burdock root can prevent cancerous cells from developing however there is little in the way of clinical evidence.

Animal studies done to date have been promising. They have found that burdock root may be effective against certain types of cancer including breast, pancreatic and colon cancer cells. (4)

Burdock root has excellent anti-inflammatory actions that can help soothe the pain of inflammatory conditions like rheumatism and arthritis.

Drinking burdock root tea can help ease a sore throat and even help treat painful tonsillitis. Burdock root is believed to be a useful natural remedy for sore throats and tonsillitis because it can decrease inflammation and boost wound healing in the throat. According to traditional use, it is also useful for relieving coughs and other respiratory issues.

Your spleen is an essential organ in keeping your body clear of harmful infections, caused by bacteria, viruses and other pathogens. Many people suffer from enlarged spleen which is a warning that your immune system is failing to remove threats.

How to Make Burdock Root Tea

You can buy ready made burdock root tea or you can make it yourself by following some simple instructions.