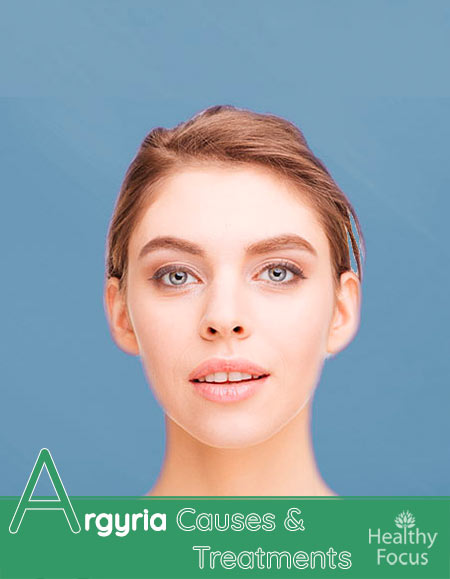 Argyria is a very rare condition which is characterized by the skin and mucus membranes becoming stained a blueish-gray color. It is caused by the exposure to silver and silver particles getting deposited in the skin. The most common sources of silver exposure include the following:

The most common form of silver exposure is to miners working in the silver industry including those involved in mining, refining and silverware manufacturing. Others at risk are people involved in the manufacture of metallic films and processing of photographs.

The long term use of silver salts as medication can also result in problems, Silver salts are used in eye drops, solutions for irrigating nasal mucus membranes and the urethra and in wound dressings. Silver acetate is also contained in an oral smoke remedy which may cause a toxic reaction after prolonged use.

Colloidal silver supplements are becoming increasingly popular and are marketed as an alternative treatment for a range of conditions including diabetes, arthritis, cancer, HIV and infections. Many people diagnosed with argyria blame the prolonged use of colloidal silver.

Several recent reports of argyria come from people who have used colloidal silver products and in many of these cases people had used their own home made colloidal silver after following instructions that appeared online.

Exposure to silver could also stem from surgical procedures that use silver sutures and from the silver fillings commonly used in dentistry.

Silver can enter the body in several different ways. It may be the result of tiny silver particles being absorbed through the skin or ingestion of silver from one of a number of routes.

Most occupational cases of argyria are caused by the skin being in prolonged and direct contact with silver salts. When silver is taken orally or via the mucous membranes as medication or in the form of a colloidal silver supplement, it is bound to a plasma protein called albumin.

It then gets transported through the blood stream and deposited in a various bodily tissues. The highest concentrations of silver end up in the skin, the liver and spleen. Most of the silver absorbed by the body gets excreted in the feces while some gets excreted through urine.

We need to note that argyria is extremely rare and even exposure to relatively high levels of silver is unlikely to result in the illness.

The chances of developing argyria actually depend on a variety of factors including the size of the dose, the duration of the exposure and whether the silver was ingested, inhaled or absorbed through skin contact.

While there is a great deal of uncertainty surrounding these factors, it seems clear that the degree of pigmentation that patients suffer depends on the amount of silver that is present in the body.

This form of argyria affects a much smaller part of the body. Ocular argyrosis can occur in a person’s eye due to the overuse of eye drops or other cosmetics which contain silver particles.

Localized argyria can also occur in the ears or any other part of the body where silver piercings are worn. This type of argyria is characterized by small blue macules which can also result from acupuncture needles.

Long before the skin changes its color to blue, you are likely to receive some subtle warnings that you may have argyria. The kidney helps excrete silver through various channels including the skin, urine, fingernails and hair.

Because silver tends to be stored in the nails before being released, it is fairly common in cases of argyria to witness the skin beneath the nails changing to gray or blue.

Another telltale sign is that overexposure to silver can reduce a person’s selenium levels. This is significant because selenium is vital to the proper function of the thyroid. Thyroid hormones have a direct effect on mood, energy levels and hormonal balance.

While generalized argyria has a dreadful effect on a person’s exterior appearance, it is a benign condition that does not damage a person’s general health and appear not to affect any major bodily functions.

A final diagnosis of argyria is done by a skin biopsy but because it is such a rare condition, there is always a chance that it will be misdiagnosed at first.

How can Argyria be Treated?

At the moment, there is no known cure for argyria and the condition seems to be irreversible. Attempts to reverse the discoloration have been made with de-pigmentary agents but have not proved very successful.

Other treatment options include the use of hydroquinone to diminish the volume of silver particles in the upper layer of skin and the sweat glands and robust cleansing protocols with the aim of eliminating silver and other environmental toxins.

Some have claimed a certain degree of success in reversing the discoloration with laser surgery. Another potential treatment avenue is supplementing with selenium and vitamin A, C and E in order to decrease the size of any silver particles within the skin and preventing them from absorbing light.

In order to prevent any further exposure to silver, you should stop using any treatments which contain silver. Occupational exposure can be prevented by wearing the appropriate protective clothing.

Once affected, good sunscreens may help stop any further discoloration of the skin and as a last resort you could use cosmetics to disguise your skin’s appearance.

What about Colloidal Silver?

Many cases of argyria are blamed on the continuous use of the popular colloidal silver supplements that are marketed as a ‘cure all’. Some of these cases have occurred in people that have produced their own colloidal silver at home following rudimentary instructions.

If you are keen to keep using colloidal silver make sure that you reduce your risk of toxic exposure by only consuming the best quality supplements and avoiding the homemade or low quality variety.

READ  How to Get Rid of an Ingrown Toenail

Colloidal silver preparations that contain silver above 0.005 microns should be avoided. Some solutions contain silver particles up to 0.1 microns in size which is considered way too large.