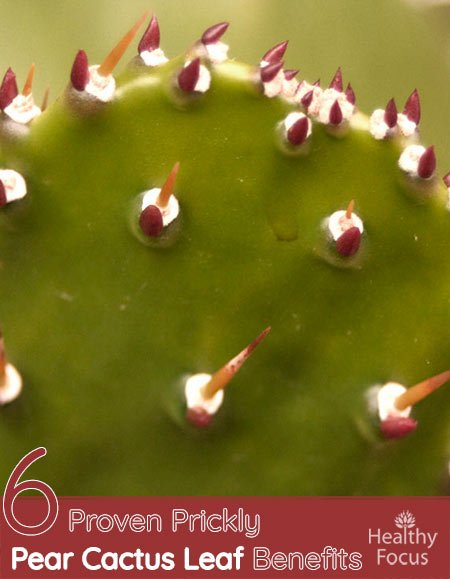 I think many people would balk at the idea of eating cactus.  But don’t let their unappealing appearance put you off. Cacti are absolutely packed with important nutrients.  Researchers are beginning to discover just how much they can do for our health.

Prickly pear cactus has earned the reputation of a ‘superfood’ in some quarters and while the term may be overused, research has demonstrated that this wonderful plant can help with a range of illnesses from diabetes to heart disease.

The prickly pear cactus is an edible type of cactus plant which grows in certain arid areas of the planet including Latin America, the Caribbean and western parts of the USA. The plant which is also known as Nopal cactus or scientifically as Opuntia ficus-indica bears an edible fruit commonly known as prickly pear which has plenty of health benefits in its own right.

While the idea of consuming cactus may be new to many of us in the Western world, the prickly pear cactus has been a significant commercial crop in Latin America, Mexico, the Middle East for quite some time. It is mainly cultivated for its delicious fruit which are eaten raw or made into jams, candies and sometimes even alcoholic drinks like vodka.

The fruit grows on the familiar broad leaves of the cactus plant but it is not only the fruit which is eaten. These padded leaves known as nopales are often used in Mexican cuisine as part of a grilled vegetable dish. This article covers the padded leaves (nopales)—NOT the fruit. For information and benefits about the fruit—read here.

If you are not convinced that eating a cactus plant is the best idea, you may be surprised to learn just how much nutritional goodness it contains. The plant is very high in fiber and is a great source of natural antioxidants and healthy carotenoids.

Prickly pear cactus contains a number of important minerals including potassium, calcium and phosphorus. While the fruit is probably the most appetizing part of the cactus, almost the whole plant is edible including the leaves and the stems. The prickly pear fruit seeds are a great source of linoleic acid which is an important fatty acid well-known for its many health benefits.

Studies on the prickly pear cactus have demonstrated that it might help reduce cholesterol in people suffering with hypertension. A French study published in 2007 was conducted to examine the impact of dried cactus leaves on 68 participants with metabolic syndrome.

This marked improvement in cholesterol level is extremely significant in terms of overall health and heart health in particular. High cholesterol is associated with atherosclerosis and an increased risk of killer diseases like heart attacks and stroke. (1)

If you would prefer to eat the fruit, prickly pears can also help protect your heart. The potassium found in prickly pears can help to reduce blood pressure by dilating the blood vessels which reduces the overall strain on the cardiovascular system. Compounds found in the fruit known as betalins have been linked directly to a strengthening of the blood vessel walls which protects the vessels from damage.

There is some preliminary evidence that prickly pear cactus extract might help reduce blood sugar levels in people suffering from type 2 diabetes. The fiber and the pectin fiber present in prickly pear cacti appear to be able decrease the amount of sugar absorbed by the stomach and the intestines.

The extract also improves a person’s insulin sensitivity which helps prevent oxidative damage to the liver.

An Austrian study published in 2002 examined the effect of prickly pear cactus leaves on 24 adult males with high cholesterol levels. After being treated with cactus extract for eight weeks their LDL cholesterol and triglyceride levels had decreased significantly.

Not only did their cholesterol levels drop but participants who took the extract also experienced a reduction of 11% in blood glucose and a similar reduction in insulin. (2)

The researchers belied that the fiber pectin content of the prickly pear cactus extract was largely responsible for these beneficial effects. 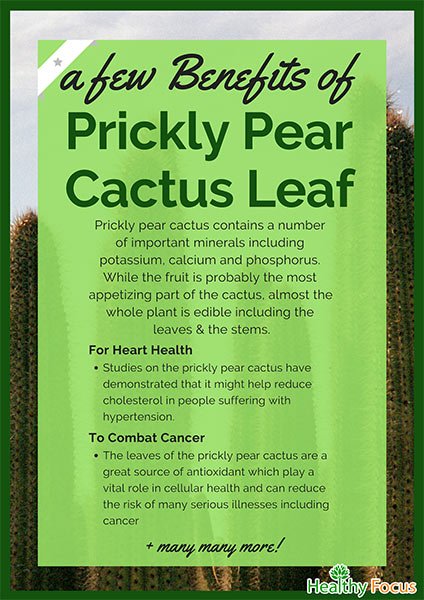 The leaves of the prickly pear cactus are a great source of antioxidant which play a vital role in cellular health and can reduce the risk of many serious illnesses including cancer. In fact, a laboratory study published in 2009 was done to examine the effects of the leaves on liver, prostate, breast and colon cancer cells.

The study found that the phytochemicals present in the cactus leaf inhibited cancer cell growth and left healthy cells unharmed. (3)
While this study is certainly exciting, it remains to be seen whether the results could be replicated in human patients.

Prickly pear cactus and along with its fruit is a low calorie fiber rich food that might help you to lose some of those extra pounds or at least control your weight.

The fiber in prickly pears and other high fiber fruit and veg helps keep the digestive system running smoothly and can also cause you to feel more sated. This means you will eat far fewer calories through the day especially if you replace a calorie laden snack with a delicious, healthy prickly pear.

Supplements made from prickly pear cactus may also aid weight loss because they act as a diuretic. An animal study published in 2010 found that a certain brand of cactus supplement given to rats caused them to lose significant amount of weight compared to the control group.

The weight loss seen in rats given the cactus extract was comparable with another group of rats that were given a common prescription diuretic. (4) The researchers also noted that the extract exerted an antioxidant effect.

Research into the chemical composition of prickly pear has identified several very potent antioxidants which can confer many important health benefits including protecting the brain from cellular damage.

One study published in 2003 found that the quercetin and dihydroquercetin that they isolated from the fruit and the stems of the prickly pear cactus helped protect the brain cells of rats. (5)

6. For those Nasty Hangovers

If you are a regular drinker or if you just succumb to the occasional binge on special occasions, you will be more than familiar with that terrible morning after feeling. Thankfully, there is some evidence that the prickly pear cactus can help you to overcome the hangover without resorting to pain killers.

An interesting study published in 2004 was conducted to analyze the potential effects of prickly pear cactus extract on hangovers. The participants were told to take the extract several hours before drinking up to seven alcoholic beverages.

What they found may interest the drinkers among you. The participants who took the extract experienced fewer symptoms and cut their chances of experiencing any type of hangover in half. The researchers concluded that the effects of the extract were due to its anti-inflammatory actions. (6)

Prickly pear cactus fruit is becoming increasingly popular outside of the traditional markets of Mexico and Latin America. The fruit can be eaten raw or made into jellies and jams. The cactus leaves or pads are also available in some grocery stores.

If you can’t find the real thing, prickly pear cactus extract is also available in supplementary forms including capsules and oils.

There are some potential side effects associated with prickly pear cactus and the supplements. It is recommended that you introduce it into your diet gradually in order to reduce the risk of side effects.