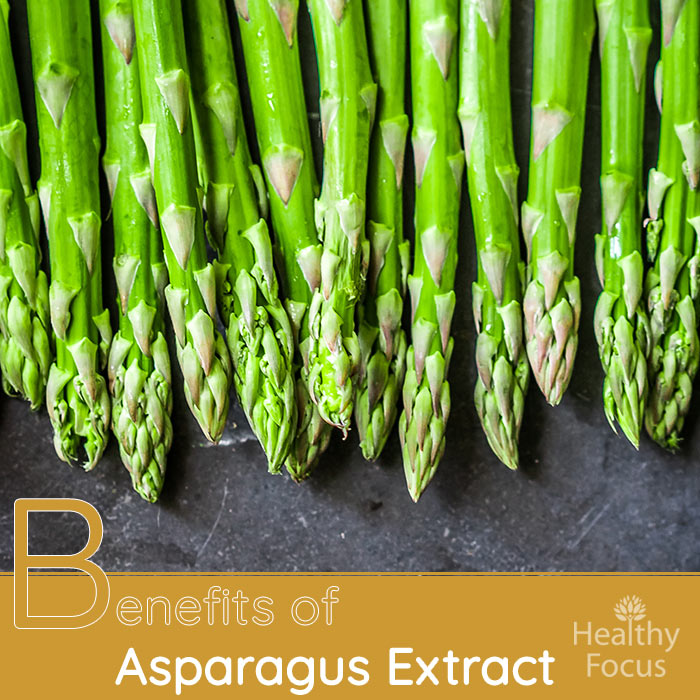 I am sure that you are all familiar with asparagus and many of you will love the tasty vegetable as much as I do. There is good enough reason to eat asparagus just for its taste and texture but the vegetable is also extremely good for your health. This article will not be looking at the vegetable itself but at the health benefits supplemental extracts made from the leaves and roots of the asparagus plant.

Despite the relative lack of research, asparagus extract has been getting quite a bit of publicity on wellness websites for its ability to overcome hangovers and detox the liver. There are also claims that asparagus extract has a number of other potential benefits ranging from cholesterol and blood pressure reduction to increased libido.

Despite the lack of human trials, there have been a number of studies conducted on animals. Some have used asparagus leaf extract while others have used extracts made with other parts of the plant including its root and stems. In this article, we will use the term asparagus extract to mean any extract made from the Asparagus racemosus or the Asparagus officinalis L plant.

The Health Benefits of Asparagus Extract

In one study published in 2011, mice fed on a high fat diet were also given asparagus extract to examine its effects on cholesterol. The results proved very promising and after eight weeks of being fed with the extract, researchers found that cholesterol levels in the mice had improved significantly. As well as a reduction in total and LDL cholesterol levels, there was a dramatic increase in HDL (the good type) cholesterol levels. (1)

The researchers believe that asparagus extract works on high cholesterol because of a substance called n-butanol which exhibits powerful antioxidant properties.

As well as helping to reduce cholesterol levels, there is evidence that asparagus and asparagus extract can protect your heart’s health by reducing blood pressure.

Angiotensin-converting enzyme inhibitors also known as ACE inhibitors are prescribed commonly to treat people with hypertension. These drugs work by helping your blood vessels dilate and relax allowing for easier blood flow and resulting in reduced blood pressure. Unfortunately, these ACE inhibitors also come with the risk of serious side effects including kidney failure that proves fatal 30% of the time. Another severe side effect is raised potassium levels which can cause heart problems. Other side effects of ACE inhibitors are headaches, fatigue, dizziness, liver damage, depression and reduced libido.

The good news for people with high blood pressure is that researchers have recently found a natural form of ACE inhibitor on the asparagus plant. The study published in 2015 revealed that a metabolite present in asparagus spears called asparaptine functioned as an ACE inhibitor and appears to help reduce blood pressure in the same way.

Previous animal research had already found that being fed for ten weeks on a diet containing 5% asparagus helped reduce the rat’s systolic blood pressure significantly compared with the control group. The researchers noted that another compound present in asparagus called 2″-hydroxynicotianamine may also function as an ACE inhibitor. As well as helping reduce their blood pressure, rats fed with asparagus also showed an improved rate of creatinine clearance which is a measure of improved kidney function. (3)

This body of research suggests that asparagus and asparagus extract could benefit the heart by reducing blood pressure as well as improving kidney health.

Anybody that likes a few drinks will be familiar with the rotten feeling the next morning. There are plenty of natural hangover cures that you can try, and some which prevent you from getting a hangover in the first place.

The potentially good news here is that asparagus extract might help to alleviate hangovers caused by excessive alcohol consumption. Unfortunately there is not a great deal of evidence but asparagus has long been believed to be a natural hangover cure prompting researchers to analyze its effects in a preliminary trial.

The study which was published in 2009 looked specifically at the effect of asparagus leaves and shoots on liver cells. The researchers found that asparagus leaves were especially effective in boosting the activity of certain enzymes involved with the break down of alcohol in the human body. The researchers suggested that asparagus extracts may help to alleviate hangovers caused by alcohol as well as helping the liver dispose of other toxins. Moreover they suggested that the study indicates that parts of the vegetable that are often discarded have potential medicinal value. (5)

With so many people in the world suffering from diabetes and the fact that diabetic medications carry such a risk of serious side effects, researchers are looking for an alternative and safer treatment option.

According to preliminary studies carried out on rats, asparagus extract might heave a future role to play. In one study published in 2012, rats with diabetes were given asparagus extract and researchers found that it helped to regulate their blood glucose levels. They also found that the extract improved insulin secretion while it also boosted antioxidant status.

Asparagus roots have commonly been used for their aphrodisiac properties. They have traditionally been used in India and other parts of Asia for their ability to enhance sexual desire and performance leading researchers to analyze whether it was indeed effective as an aphrodisiac.

Asparagus extract taken from the asparagus roots was given to male rats with the results being compared to a control group. This resulted in a significant anabolic effect with body weight gains as well as weight gain in reproductive organs. Moreover, being fed asparagus extract resulted in significant changes in sexual behaviors including increased frequency and ejaculation latency. Penile erection was also enhanced significantly in animals fed the extract. (6)

The results may be attributed to the testosterone-like effect of asparagus extracts and may five some scientific support for traditional use.

Asparagus when eaten as food is considered very safe however there is very little research into the long-term safety and potential side effects of supplementary asparagus extracts. As with any supplemental herbal remedy, you should always be careful and speak to a doctor before you start taking it.